Home » Blog » hardware » The Kickstarter
After the announcement of the Issue 1 board with integrated HDMI on the 18th November 2016, it doesn’t take long for the actual samples to be made. The 26th January 2017 to be precise. These are the boards intended for the Kickstarter. 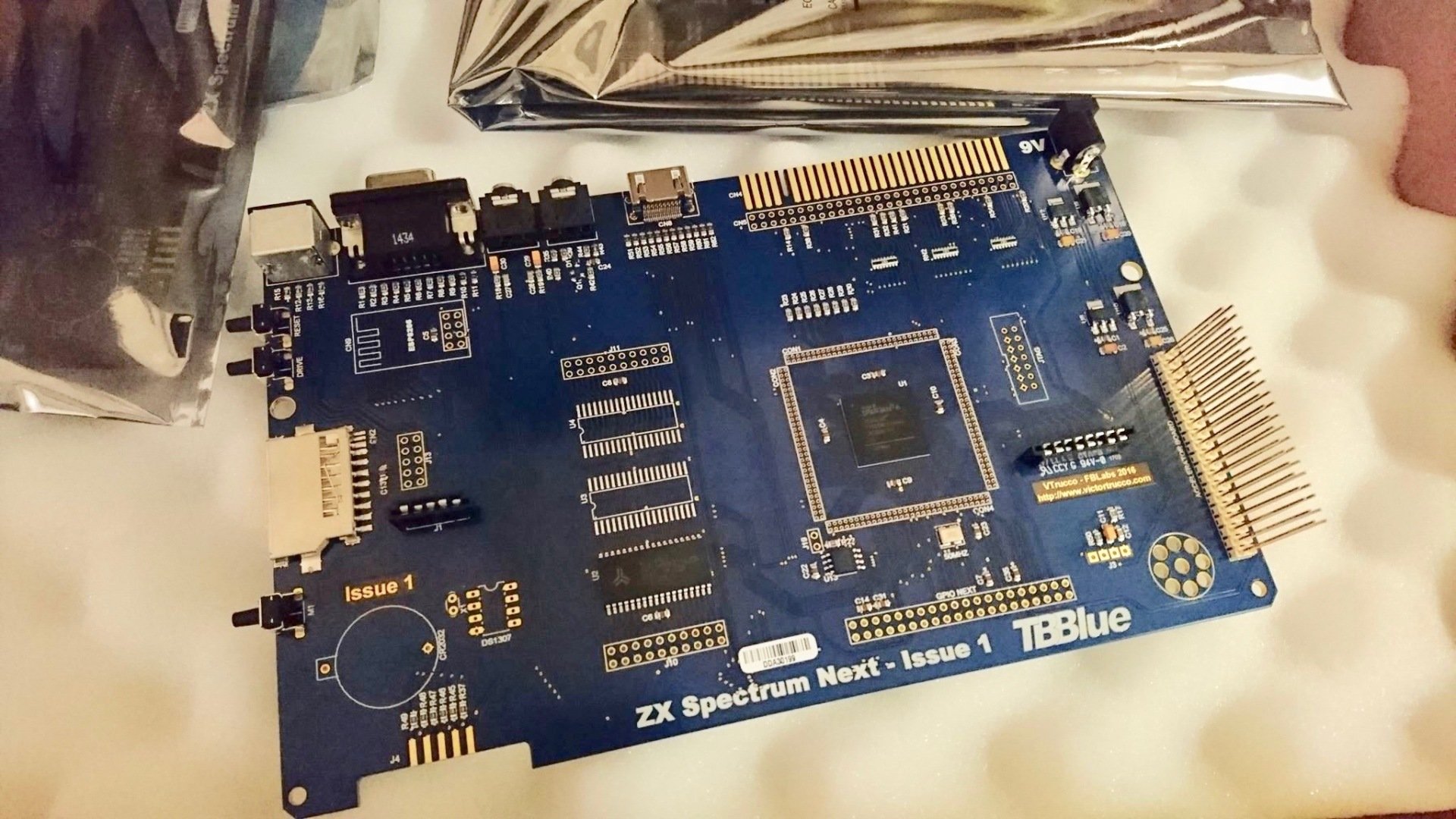 ZX Spectrum Next Issue 1 board with built in HDMI and very long pins!

On the 23rd April 2017, a year after the reveal at Play Expo Blackpool, the ZX Spectrum Next Kickstarter launched at https://www.kickstarter.com/projects/1835143999/zx-spectrum-next

Due to the overwhelming demand for the Accelerated tier, Henrique confirmed on the 27th April 2017 that he had secured more Raspberry Pi Zero’s.
29th April 2017 saw the first stretch goal reached. Instead of an SLX9 FPGA, the ZX Spectrum Next would be graced with an SLX16. That’s over 5000 more logic elements for graphic goodness!
On the 1st May 2017, the Kickstarter funding hit the £400,000 mark with 1743 backers having contributed thus far. There is still 21 days to go!
On the 7th May 2017, Henrique went for coffee with the legend, Rick Dickinson.

On the same day, the Kickstarter hits the £450,000 stretch goal and RAM and Wifi sockets are added to the mix. A few days later and the ZX Spectrum Next has 2000 backers!

On the 17 May 2017, the Kickstarter funding reaches the £550,000 mark and this gives us the much wanted printed manual. The Facebook group now has 4000 members!

A few days later, the funding reaches the £590,000 mark and we unlocked two new games. Dreamworld Pogie and No Fate!
Not content with leaving things there, the funding reaches £600,000 and another stretch goal is realised. The Internet Toolbox which will provide the mechanism and a suite of programs for connecting the ZX Spectrum Next to internet services.
On the 21st May 2017, the Kickstarter reaches £625,000 and this unlocks another much wanted tier, the box of goodness. Now there will be a box you can be proud of.
The 22nd May 2017 moved us into the last 24 hours of the Kickstarter and what a ride it had been. Not only does the funding hit the £650,000 mark but it also unlocks yet another stretch goal. Twin joystick ports! By the end of the day, it moves past the £700,000 mark and when all is done, the final total is £723, 390 raised by 3113 backers!