Home » Blog » hardware » The Early Years
In 2010, Victor Trucco decided to make a TK clone. The TK was a Brazilian clone of the Sinclair ZX Spectrum made by Microdigital Electrônica in 1985. Victor made a near-working prototype using wires and copper prototype boards.

At this point the project was named “TKBlue”, because Victor planned to use blue as the solder mask for the final board.

In 2011, Fabio Belavenuto joined in with the endeavour to help resolve bugs in the wiring and at this point the project was renamed to “TBBlue”.
In the middle of 2012, Victor and Fabio started early tests on an Altera DE1 FPGA development board and from this, Fabio produced a wire separated board.

Wire separated board by Fabio 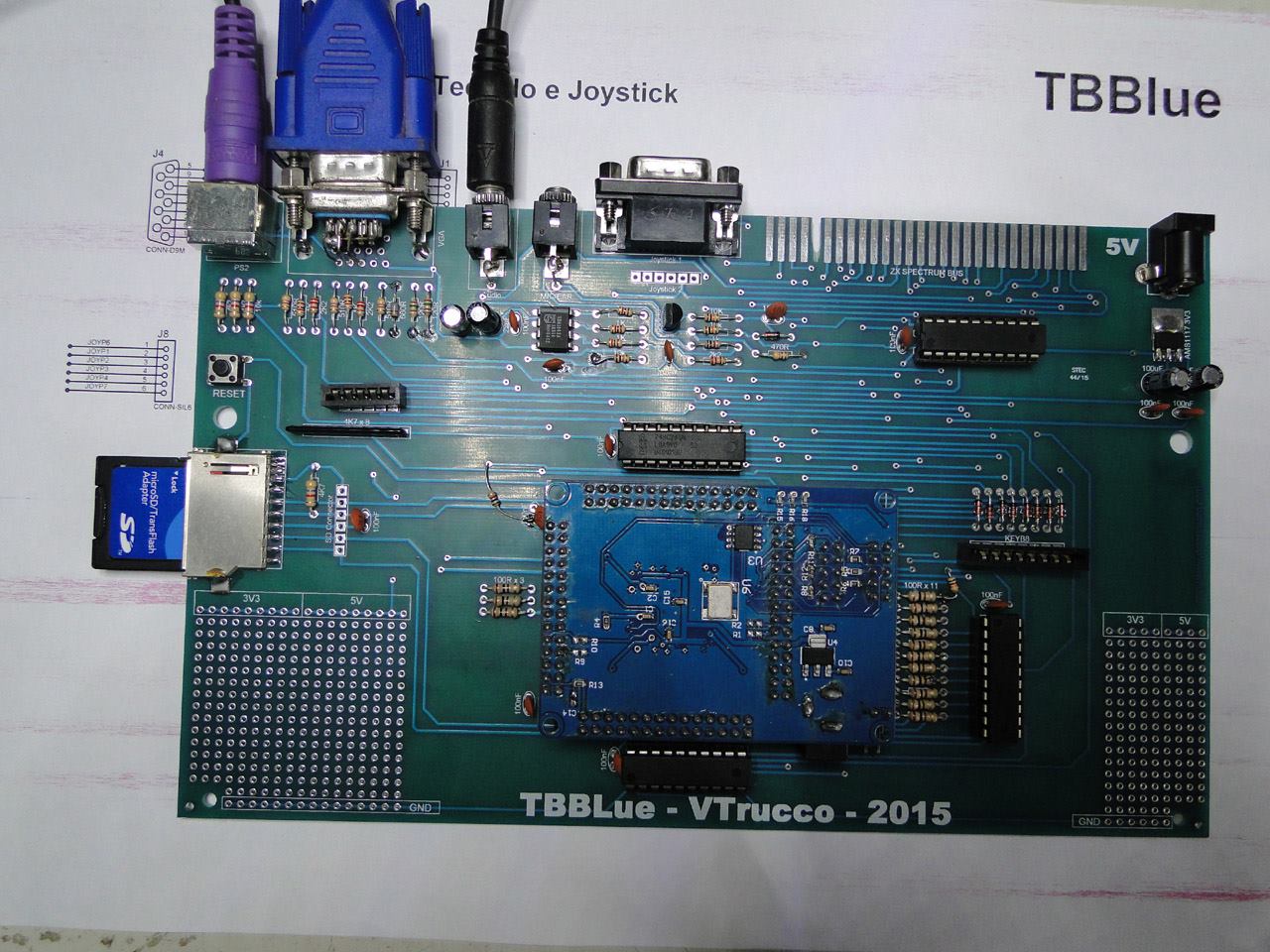 An evolution of TBBlue based around an Altera FPGA – 2015 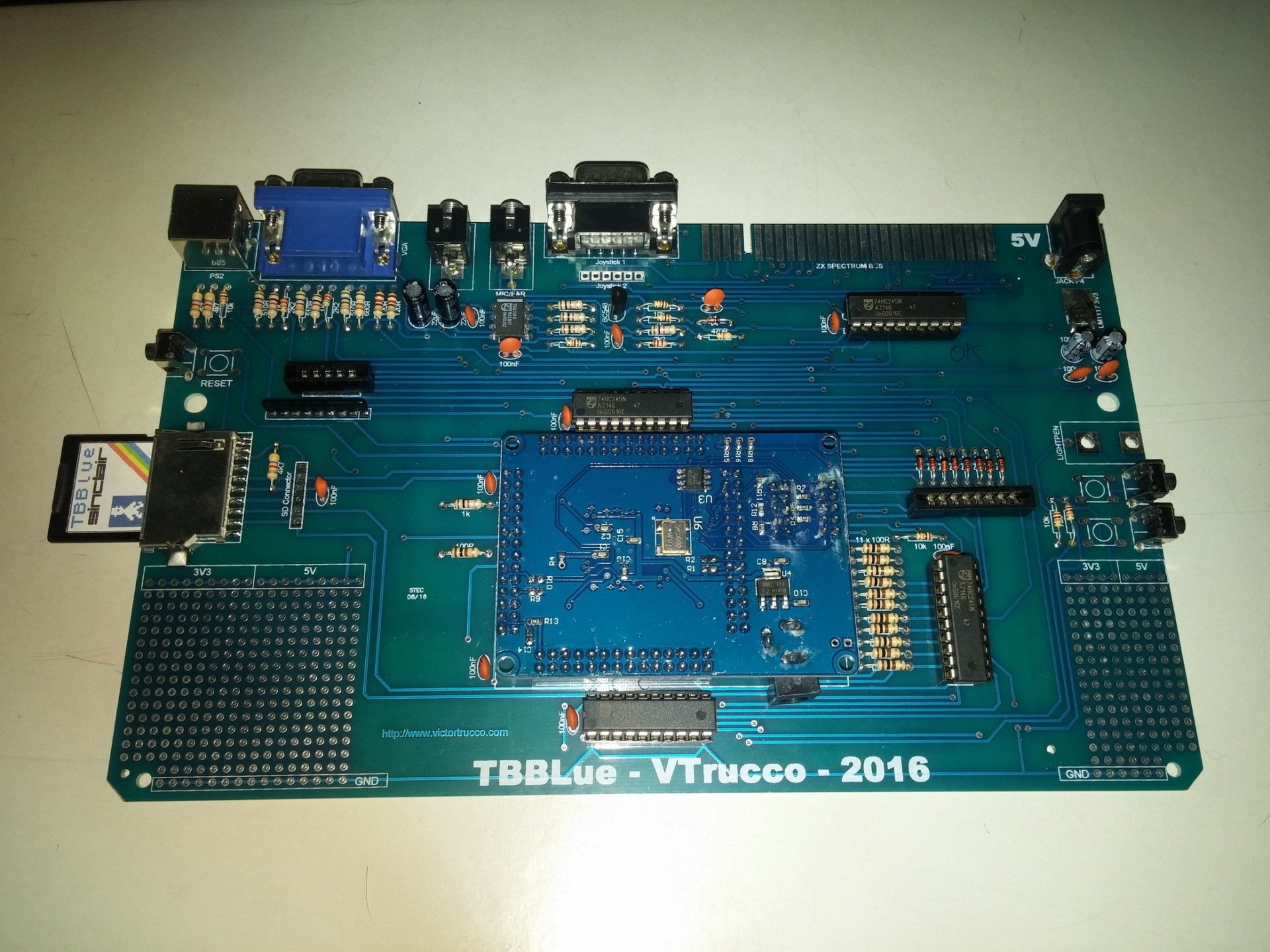 More refinements are made to the design – 2016 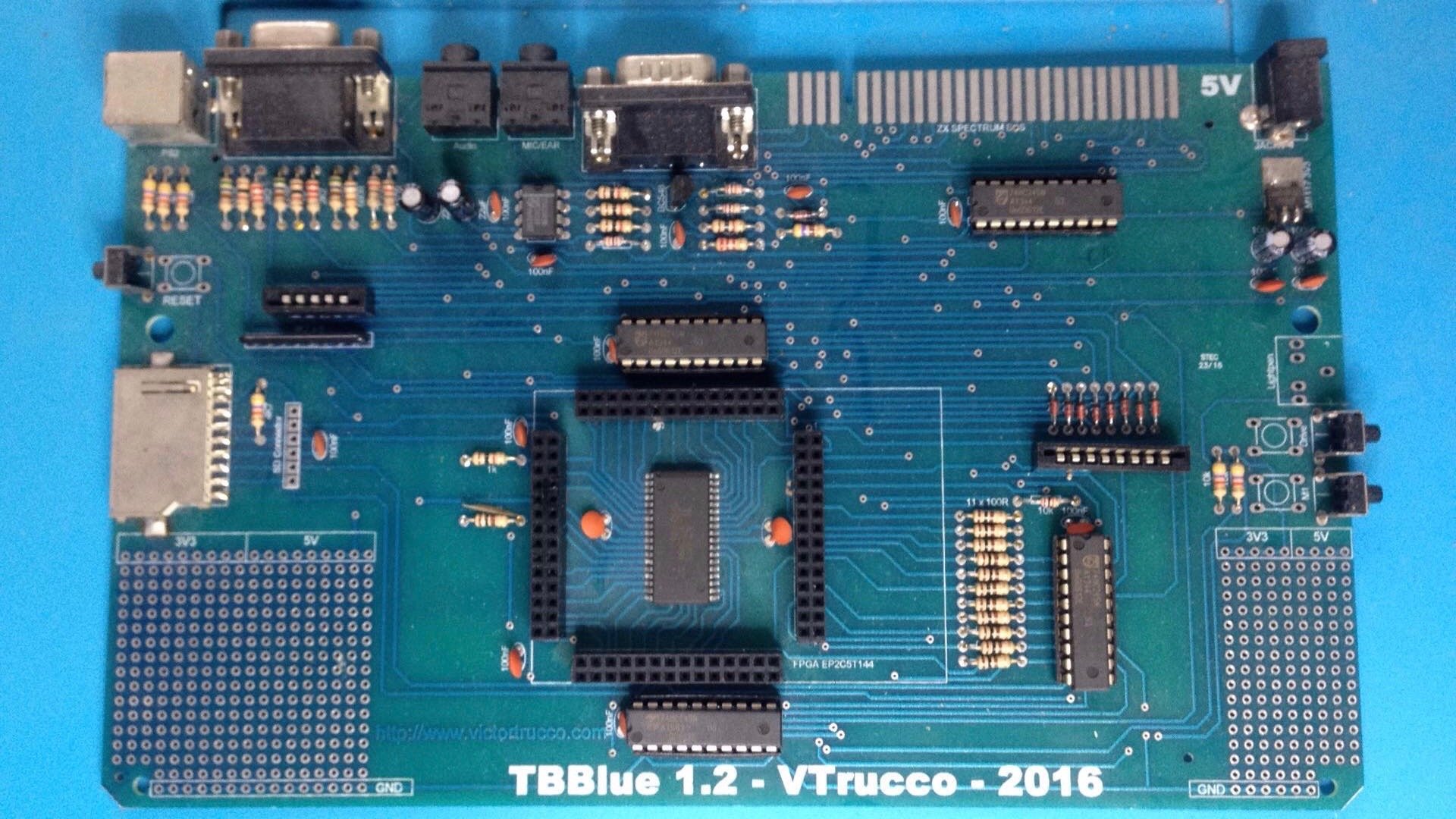 On the 26th April 2016, after much teasing about the Spectrum Next on various Sinclair Facebook groups, the official ZX Spectrum Next Facebook page appeared at https://www.facebook.com/groups/specnext/

A few days later on the 30th April 2016, Henrique Olifiers made an official announcement of the ZX Spectrum Next at Play Expo in Blackpool. How did this come to be from a couple of guys in Brazil with a board, to making a fully fledged product? Well Henrique explains that bit in the manual
Watch the announcement at Play Expo and an interview with Henrique Olifiers below!
Things are moving quickly here and Henrique is off to SMS (Smart Made Simple) in Nottingham. They are the company who will produce the boards as well as handling a large amount of the logistics. 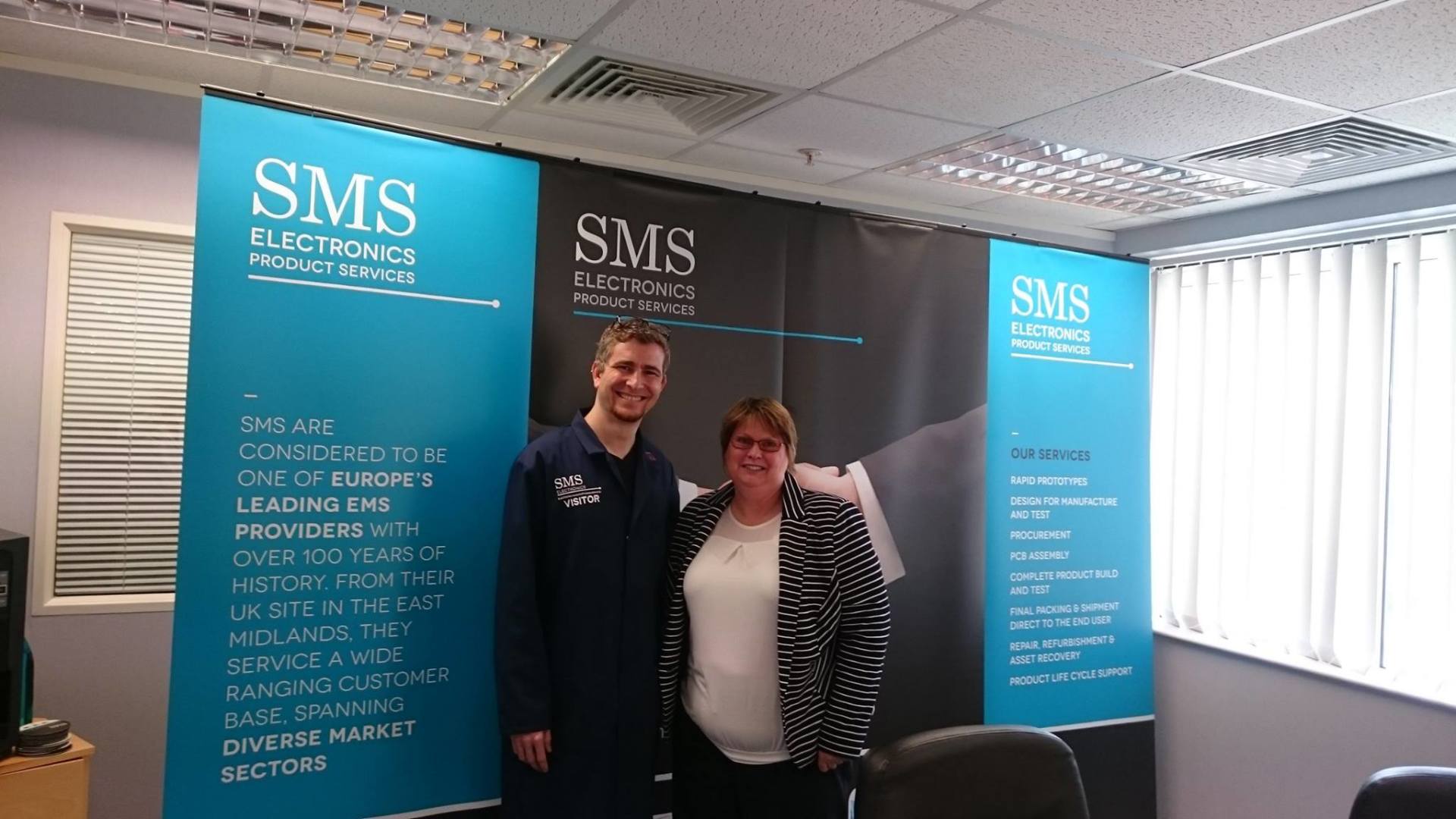 Henrique with Anita Brown, the Business Development Manager at SMS

After just a few months of tweaks, including the dropping of the Altera FPGA in favour of the Xilinx Spartan FPGA, the first prototype boards arrive. 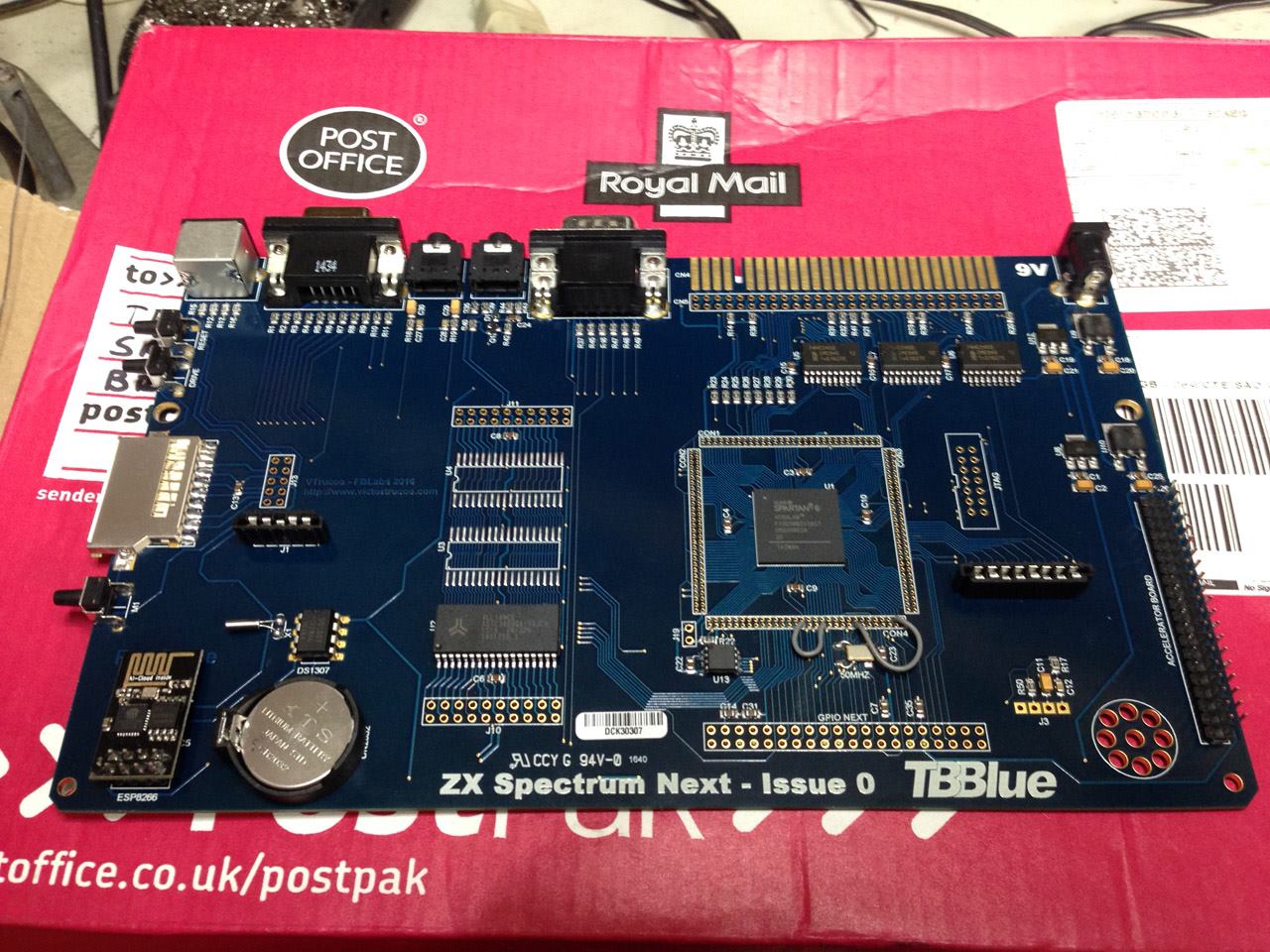