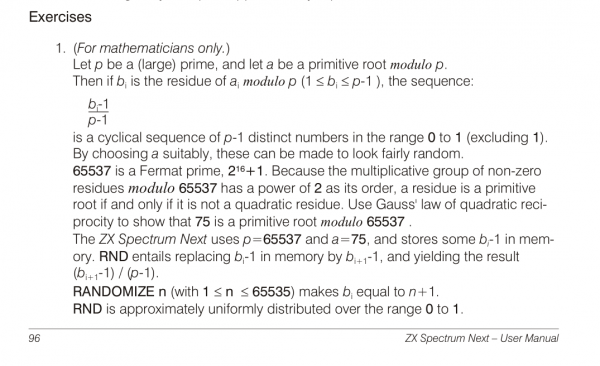 There is a useful disassembly (https://skoolkid.github.io/rom/dec/asm/9720.html) about the standard ROM routine, that using the “ROM calculator” in short uses the following formula

where % is the “modulo operator”.

Since a number larger than 65536 is involved (i.e. modulo base 65537), and Spectrum’s Forth usually provides only quotient/remainder routine that can divide a 32-bits integer giving a 16-bits integer result and a 16-bits remainder, for a long time I deemed impossible performing such an operation without “large divisor” quotient/remainder routine. And, this meant that it was impossible in my vForth too.

In this post, I show a clever achievement that circumvents the classic 16-bits limitation, in this case.

First of all, since Forth provides words that can handle 32-bits numbers addition and subtraction, I thought that I could “emulate” a quotient/remainder routine by “repeated subtractions”, and that was a fairly right path.

Immediately I saw that sutracting 65537 from a 32-bit integer, i.e. $10001 in hexadecimal, was roughly equivalent to decrement both higher and lower 16-bits parts of it,
and that the reminder was simply some kind of “difference” between these two parts.

This was a good start, since instead of performing some huge division I just had to subtract two integers, and if the subtraction gave a negative number I just had to re-add 65537 to have it positive again.

Then I had to resolve these two limit conditions inherent using 16-bits integer Arithmetics :

So I exploited the following Forth final optimized definition that I listed below.

Here is a few seconds video (https://youtu.be/4Wh7r0ZHbSY) that shows how fast this routine is and how fast we can plot 65536 pixels using LAYER 1,2 graphics-mode. 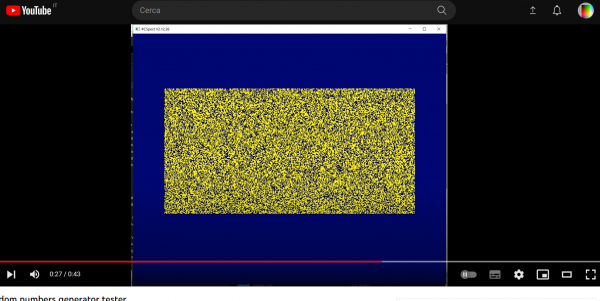 He was born and bred in Venice. After graduating at high school he served with the Lagunari Italian amphibious troops. He resumed studying at Università Ca' Foscari di Venezia and completed his degree in Economics in 2000. In the meanwhile he settled down and now he and his wife have got six children. He works as business analyst with deep knowledge in insurance technical procedures and familiarity with many computer idioms. He can speak English, Française, Italiano and Venexian. https://sites.google.com/view/vforth/vforth15-next https://www.facebook.com/groups/1326098804442710 https://github.com/mattsteeldue/vforth-next