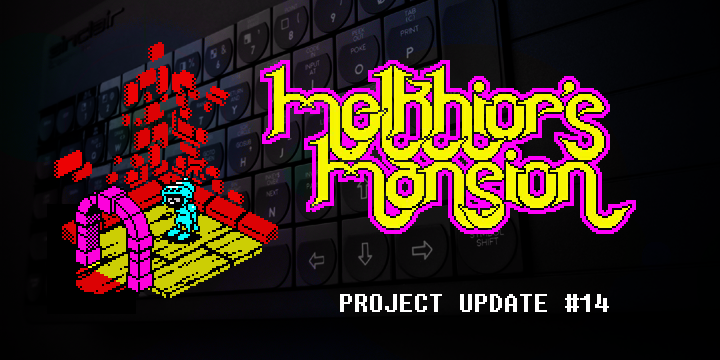 Welcome to project update #14 for the conversion of Melkhior’s Mansion Spectrum Next!

First of all, apologies for the lack of updates. My version of the game was shelved and eventually cancelled but after a long hiatus, I was pleased to announce on Halloween 2021 that the conversion of Melkhior’s Mansion was back on for Spectrum Next! The door was once again open to bring this amazing title to the 8-bit platform.

The original PC Monogame version was in development for many moons as most of you may know. Confidence was high that Richard and Craig would complete the project and that day finally arrived on the 16th of January 2022!

I had prior knowledge of the release schedule so began preparing for the mammoth task of porting it to the 8-bit Next, picking up where I left off way back in May 2019.

One of the first tasks was to learn the game mechanics for the quests – there are four in total now! Sir Stamperlot is joined by his friends Lester, Zouch the Witch and Princess Ashby. This was daunting at first, but Richard’s well-documented PDF and map of the game was a blessing. I soon got to grips with the gameplay, secrets and castle/cavern navigation.

I’d always had access to early dev builds of the original. Richard kindly added features at my request that would help with the Next conversion. I have special debug builds of the game that allow me to cheat by turning off the enemies, opening all the doors and displaying lists of all the item locations. The debug builds also allow me to export all of the room layers as separate transparent PNG files.

Craig was relieved of pixel art duty as I was able to import the assets and rooms ‘as is’. I would need to make manual adjustments to the pixel art but nothing too drastic. There were plenty of assets that didn’t make it into the original PC version so I would take advantage of those for Spectrum Next ‘extended’ content.

Richard shared his XML files allowing me to directly import the animation scripts and asset cutting meta-data. That alone will save many hours of head-scratching converting and animating pixel art frames.

The original game had evolved to epic proportions since I first signed up to convert it. Thankfully, my Spectrum Next resources, experience and toolchain/devkit had also evolved as well as the Next core features. I had recently upgraded my cross-development system to v2.0 – using v1.0 would have been a struggle and disaster.

I had plenty of tech from my own project, Ice World as well as a brand new audio engine. Complete with my working knowledge of Richard’s XML based game engine and v1.0 of the Next conversion (the early unreleased demo), I would be hitting the ground running.