On the 8th December 2015 the discussions on creating the ZX Spectrum Next were in their infancy. Henrique Olifiers had approached Rick Dickinson only a few days earlier to ask if he would be interested in taking on the role of industrial designer for the project. On the subject of the keyboard, Rick had this to say.

“I propose that we do not attempt to create and develop the intricate and specific engineering detail and tooling required for a modern keyboard ‘movement/mechanism’, the technology is already available (unlike the need for something ‘different’ in the days of the Spectrum development), and as such I think we should approach an OEM keyboard manufacturer and use their keyboard technology but with ‘our’ physical external design.”
In the immortal words of The Hobbit, “You wait – time passes”.
If I search my Inbox for the word “Membrane” I get some discussions on the keyboard of the Acorn A3000 followed by hundreds of emails relating to the membrane for the ZX Spectrum Next. The first such email is from Rick Dickinson and it is dated August 11th 2017. It is my first introduction into the world of the keyboard and it was a request for information around the flex tail connectors in terms of their specification and sizes. One image and a connector data sheet later, and Rick is resizing them to suit the Next case assembly.
A “feature” present in the original ZX Spectrum membrane is that the flex tails are in opposing alignment. FC05 is rotated 180 degrees when compared to that of FC08 and so its contacts are on the opposite side. Discussions ensue as Rick has both FC05 and FC08 aligned in the same direction in his model. Rick replies that the sample board he was provided with must be wrong as it has both connectors with the same alignment i.e. fitted the same way round. He agrees that FC05 must be rotated 180 degrees to be like the original Spectrum. The time is 03:56 on the 12th August.
The whole exercise is about a group of people learning how to build a Sinclair keyboard all over again. This time though, responsiveness is key and it must be as light touch as a modern laptop.

A drawing to clarify the flex tail arrangement

Using existing Sinclair membranes as a reference, and factoring in specific requirements based on the current case design, a prototype membrane was created. This was non-functional and was designed to address a number of key points.

In parallel, updated production graphics were sent for the key caps.

The intent was to produce a version of the Spectrum 128+, 3 layer membrane using modern methods. Initially this would be coupled to an existing PC keyboard. It is necessary to ensure that all key strokes are easily recognised with the matrix and also to ensure that the required pressure to activate a key is not too high.

The first functional prototype for testing accuracy and pressure 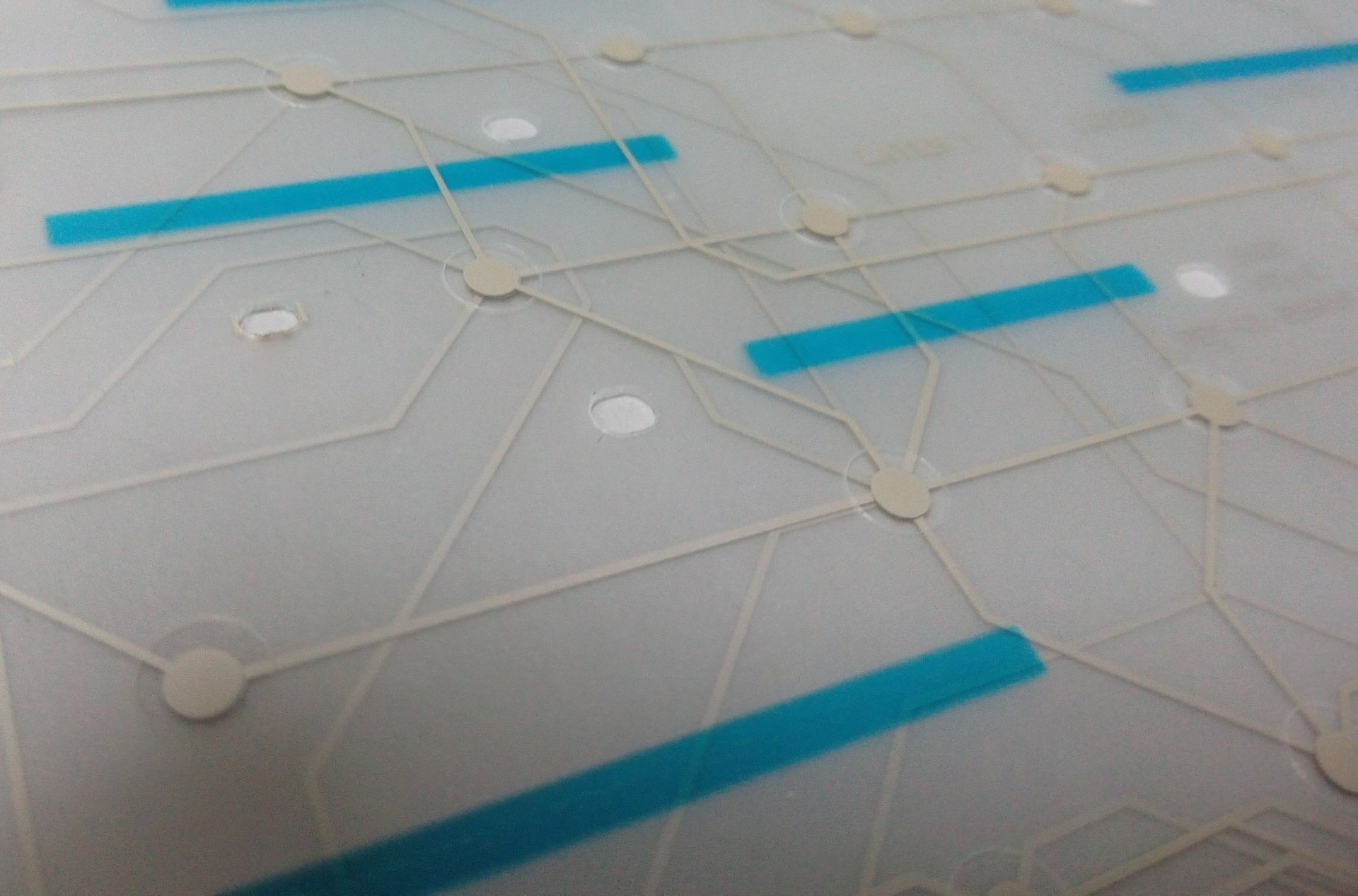 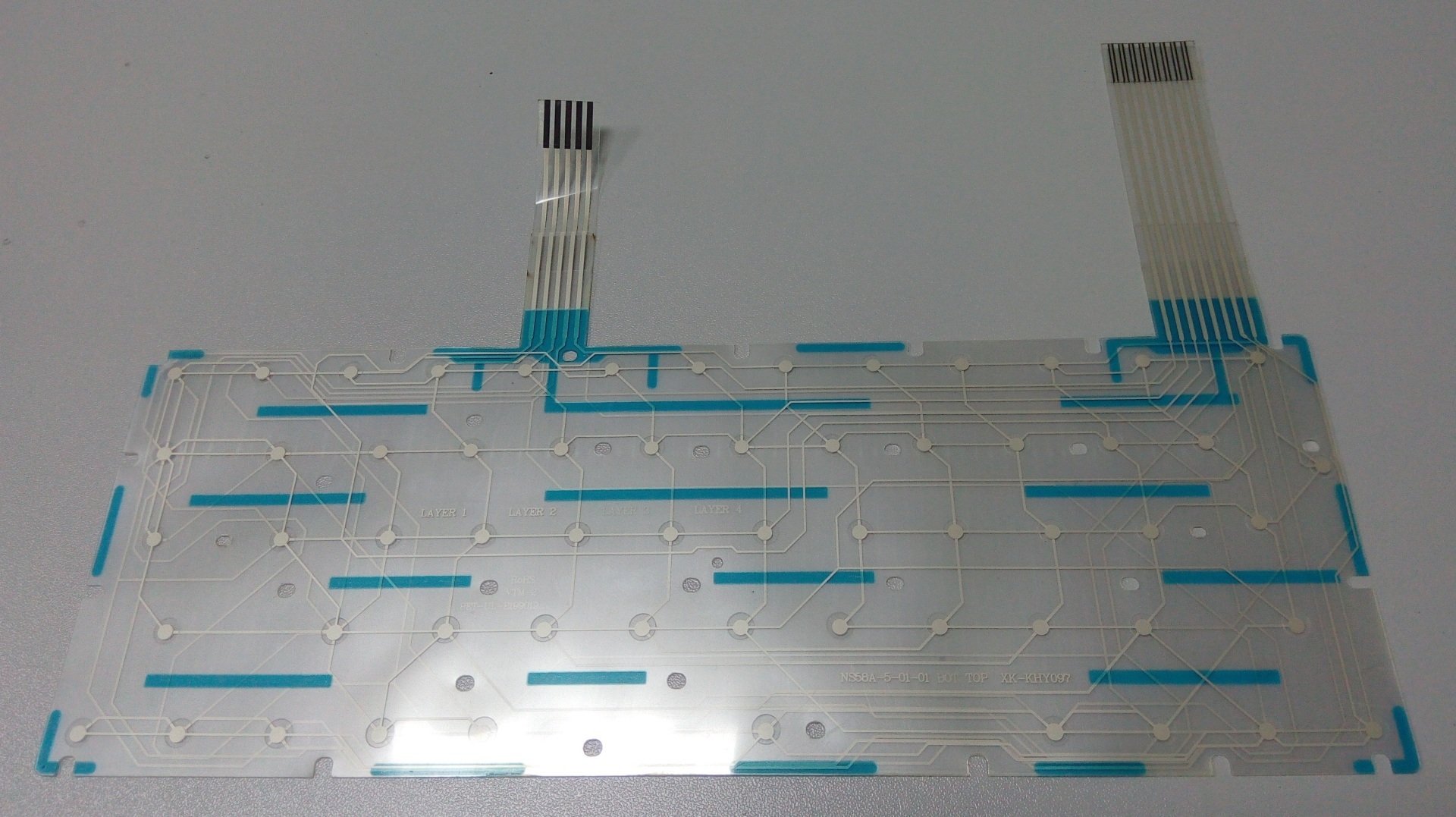 The results from the membrane testing showed that the pressure required to activate the triple contacts was too high.

The manufacturer advised us that they would optimise the design to make it as thin as possible. They estimated that the end result would be around 0.45mm thick. For this to happen they needed to revise the plastic plate and metal plate in the CAD due to the membrane becoming thinner.
Whilst the membrane was being worked on, injection was happening for the T1 keycaps. Typically with injection moulding a series of revisions will be created.
At this point in the proceedings, things such as surface textures are not included. The primary goal is to produce a design perfect set of keycaps without any blemishes or sink marks. Once this has been achieved then texture can be added. In the case of the keycaps, each key required a gloss surface (outer keycap) and textured surface (inner keycap).
A new membrane was created with a thickness of 0.42mm and was made to fit into one of our suppliers existing keyboards.
The general rule of thumb for a modern laptop keyboard is between 45 and 50g force.
Questions were asked by our partner as to whether the 5 pin flextail connector could actually be 8 pin in order that a two layer membrane could be used. Of course this is a no go.
Other things suggested were to increase the hole size, adding extra material to the activation point of the membrane, using a thinner PET layer (what the membrane switch is printed on) or changing the rubber dome to another type. The engineers also suggested adding a small dot for each key on the metal frame to help with the activation. Adding a keyboard controller between a standard double layer membrane and the motherboard. And on it goes! 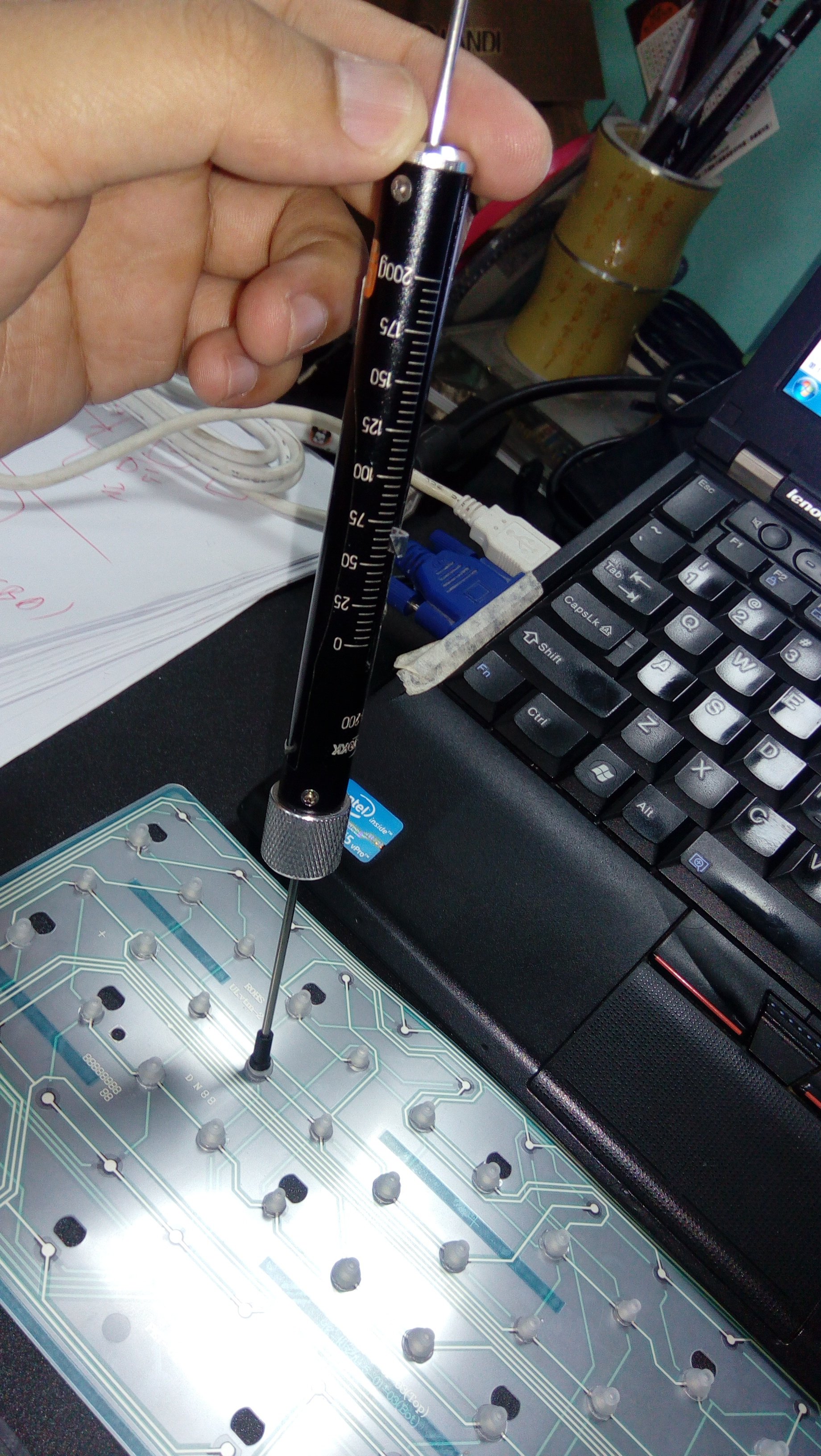 More suggestions come in with regards to increasing the dome size but there are restrictions in how large they can go because of the scissor mechanism.

It was at this point that the thought of reverting to a dual layer membrane but with one layer having split contacts came about. Instead of having a circular contract point, the activation point would be two semicircles forming two contact points.
Many things had been attempted and failed. Our partner had even purchased a Spectrum +2 from Ebay to have a look at how the membrane was configured in that!
Work began on what was called the “Complex Membrane Design” which featured the split contacts. 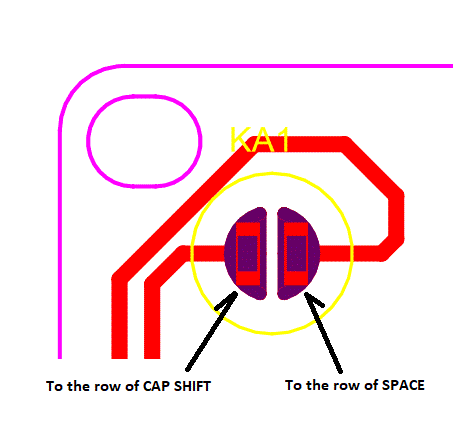 Meanwhile the non-functional membrane prototype arrives in the UK to test the fit against the case and motherboard and observations are made and are passed back. 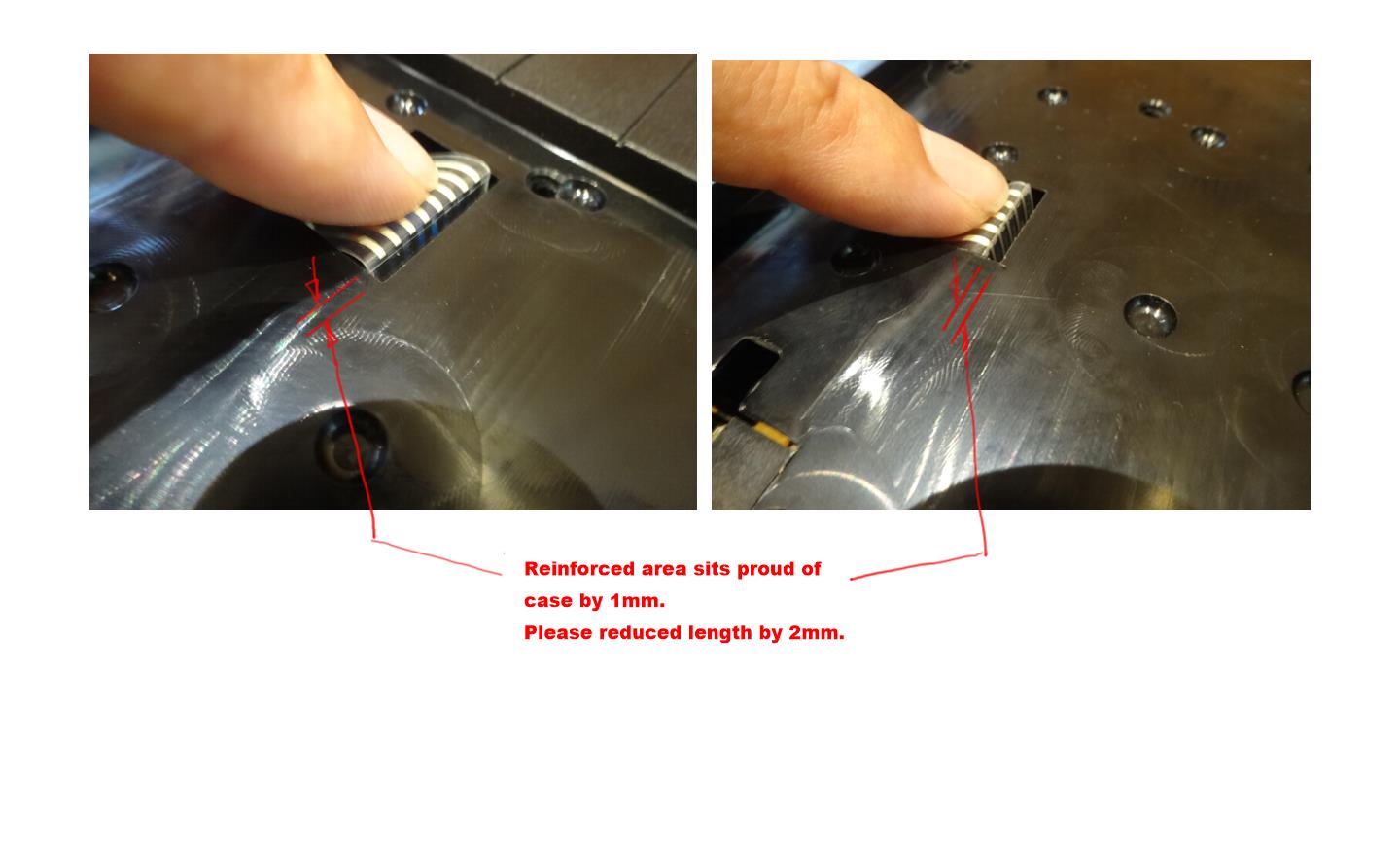 The reinforced area at the end of both flextails is a little too long and sticks proud of the case by about 1.0mm. We need to reduce the length of this zone by 2.0mm (for both flextails).

Simple functional testing begins on the prototype complex membrane and so far so good.

To aid in assembly it is observed that the flextail connectors need to be a little longer and a new drawing is issued. 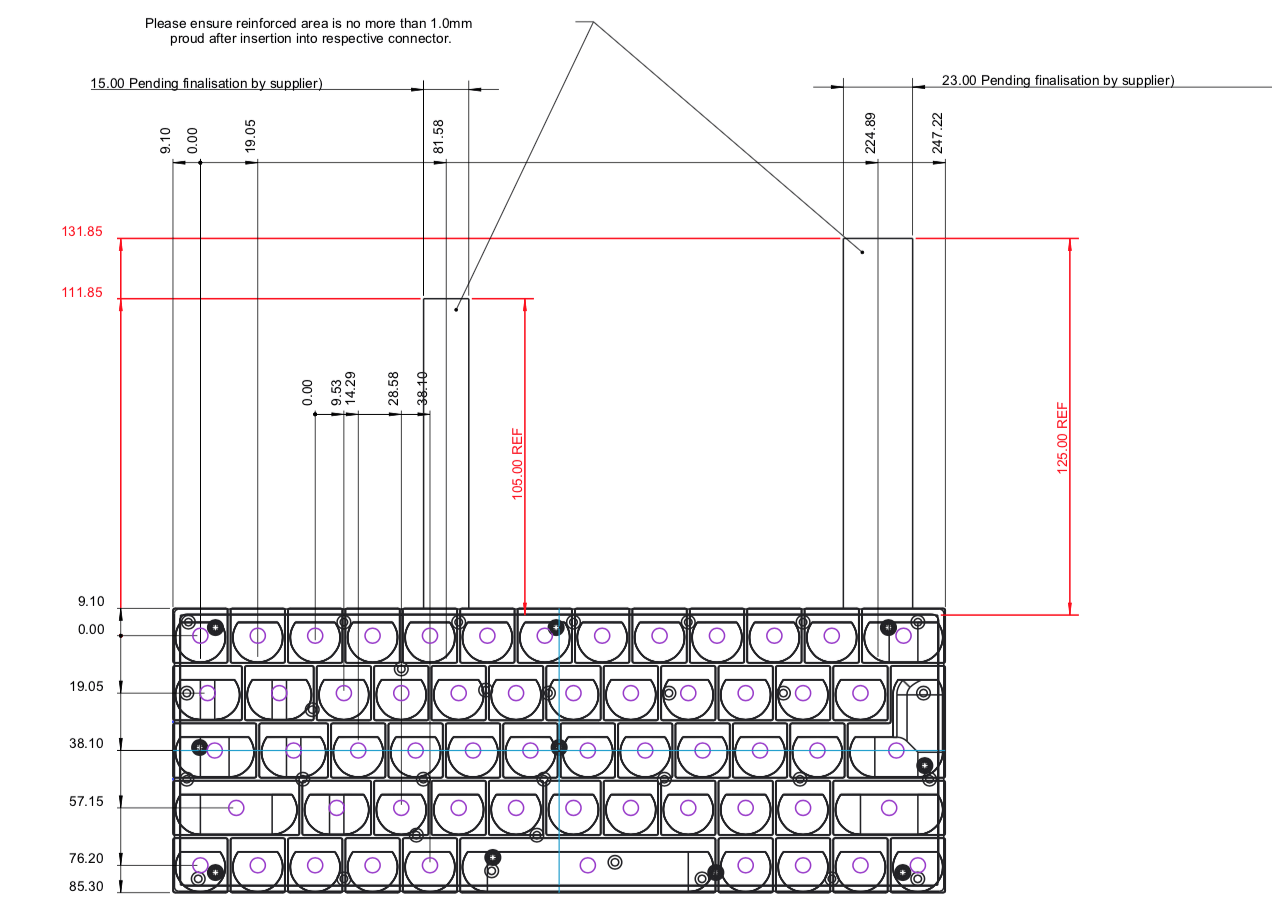 Meanwhile the T1 keycap samples arrive in the UK for analysis. These are not yet correctly textured.

Previous: Screws… Yes Screws… I can’t believe I actually sat and wrote this bit. I might even get rid!
Next: Industrial Design is Very Handy!