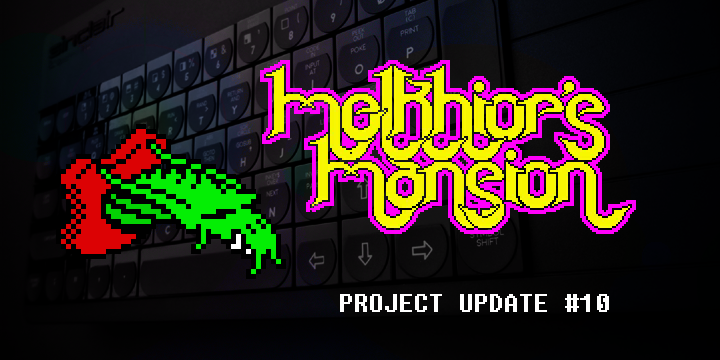 Welcome to project update #10 for the conversion of Melkhior’s Mansion Spectrum Next!

It’s been a crazy week! The game is starting to take shape, the main character can now run around and explore the game world!

The first half of the week was spent coding various routines to act on the collision data. I created several resources to gather data allowing the code to interact with the game world. The methods involved would require ‘code talk’ technical explanations so I have spared you the pain by not providing those this week!

I started development of the main character movement on Thursday. This involved adding the walk animation, inertia and the slide around obstacles bringing Sir Stamperlot to life!

I spent some time studying the original PC version. I spoke with the developer to discuss the physics and logic to make sure I was implementing their game mechanics correctly.

There were math problems to solve as the 8 bit Z80 cannot use the floating point calculations that the C# Monogame based PC version implements. The subject of normalizing a vector was brought up which requires a square root calculation. This was not ideal for the Spectrum Next’s 8 bit Z80 CPU so time was spent finding an alternate solution. The movement algorithms took a couple of days to develop and I still feel that some refinement is necessary.

Saturday was a game changer lol This was a great moment for me as I implemented the room linking system to allow Sir Stamperlot to walk through a door into a new location. At last!! I could run around the game world.

There are several coloured doors which require a key to pass through them. I have not added the object system so I have limited access to the Mansion which I found rather amusing although I can press a shortcut key to room skip.

There were various problems to solve with the room linking as the location of a door in each room is specified in a high level format. This is expected as the original version is programmed in C#. I had to resolve each door position by looking up the room’s floor size and calculating the position from a set of compass codes.

For example, the largest room is made up from a 3×3 grid of 24×24 pixel floor tiles – row and columns are used, numbered 0,1,2. A door in the centre of the north east wall has a code of NE1_0 as it relates to row 1.0 of the floor tiles. I have to calculate the position of the door in 2D space by multiplying the floor tile size of 24 by the row and column, thus it would be 72,24 pixels from the origin of 0,0 (bottom right).

Each door has a destination room number so I have to lookup the wall of the door in the new room location that points to the current room. So room 006, door NE1_0 may point to room 007 so I lookup the door in room 007 that links to room 006, find the wall which would be opposite of north east, south west in most cases, resolve the 2D location in pixels and place the player in the centre of the doorway. Lots of fun!

There are a maximum of six exits and one trapdoor in each room. Here are the Z80/x86 room data structures described above:

Here is the original XML data:

The main character is automatically pushed through the door once he is under the archway. I added a system to allow the game engine to take control of the sprite for a split second. This fakes input from the user causing the character to keep moving in the current direction, the system walks the player into the new room as soon as the screen flip completes. Control is given back to the user after 5 video frames which is sufficient to build enough momentum to slide the player away from the door. It’s subtle and many of you wont notice during gameplay especially if you keep running as you will already be travelling at maximum velocity.

Now that the doors were active, I moved on to the trapdoors found on the floor and wired those up allowing the player to access more of the game world. The final linking logic is the secret passage short cuts which I will implement after I write this post!

I have spent most of the weekend tidying up and polishing what I have so far. An example is animating the main character during the trapdoor shaft falling sequence. This burns development time but is rather important as loose ends can create bugs and I also feel that they leave the software looking half finished and untidy.

There are many nice touches in the original PC version which I am implementing one by one. The game engine has evolved to a point where it is easy to add each new coding task as the resources and code base grow.

Sadly, that’s it for this week. I will be back next Sunday night UK time (GMT) with update #11.