Originally, the box for the ZX Spectrum Next was not a large concern. Whether this was to be a very basic plain cardboard box, or something slightly more evolved (but not by much), it would have been functional but perhaps not entirely in line with the Sinclair boxes that came before it.

When the Kickstarter breached the “Box of memories” stretch goal, that thinking had to change and the box had to be colourful and shiny.
In order to achieve this, a number of companies were approached and were given a rough outline. At this point though there was no Power Supply Unit or manual so once initial ideas had been discussed, we needed to flesh out these details in order to work out the overall required dimensions and the internal fitments.
A number of PSU suppliers were approached with our requirements for a 9V 2Amp centre positive PSU. I had to be decent, trustworthy and not some random unbranded PSU. It also needed to have international adapters and had to be reasonable in terms of price as we were going to be purchasing 3,000 of them!
CB tested, TUV tested, UL tested, IEC60950-1 approved, EN60950-1 approved, UL/cUL60950-1 approved, CCC GB4943 approved, EMC EN55032 level B with Energy Efficiency Level VI and European CoC Tier 2. This is what the ZX Spectrum Next will be shipping with. After negotiations with a number of companies, one supplier won out and the PSU was selected. After receiving a few samples we now knew one of the missing dimensions. 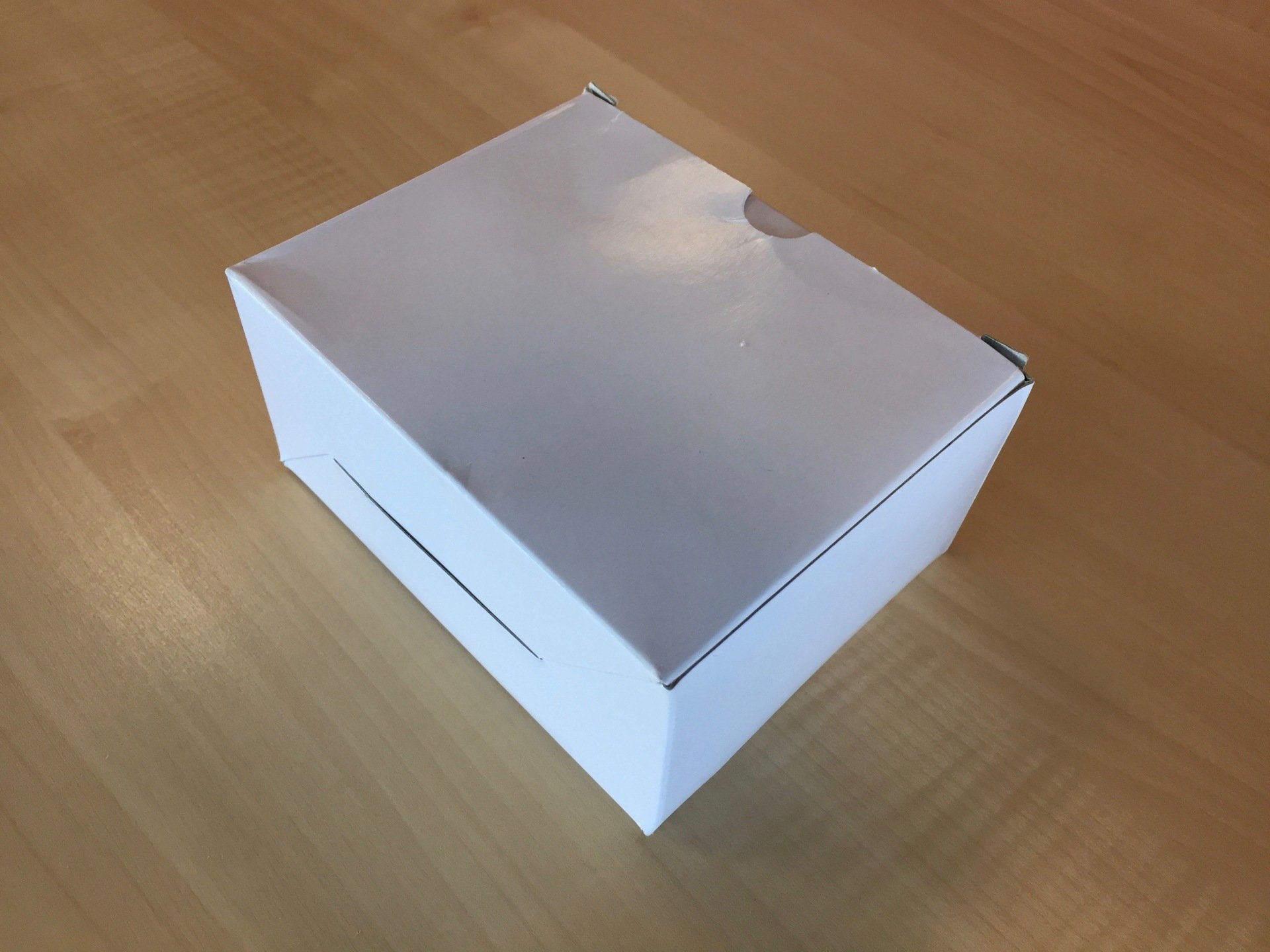 The next unknown quantity is the manual. This is a difficult one as the manual has not been written yet, so we’re going to have to all come to a decision on its dimensions which also needs to factor in the expected page count, and anticipated page weight.

After much discussion it was decided that the size would be B5. This is a fairly unusual size from my experience and pretty awkward to get a prototype made up for sizing purposes! So 176mm x 250mm is the requirement, with 200gsm gloss front and back covers and 160 x 80gsm silk leaves for the rest, spiral bound. Surprisingly not many companies would even entertain the idea of these dimensions with this number of pages in a spiral bound form.
Eventually the closest match had to suffice. This was a few mm out from the original requirements but needs must. After a week or so, cue the arrival of three prototype manuals. 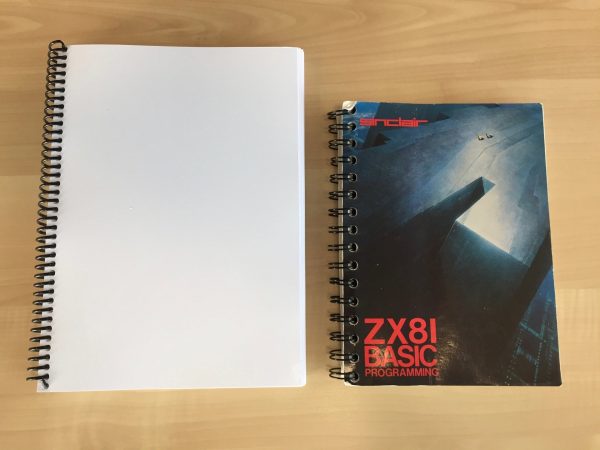 Compared to the original ZX81 manual 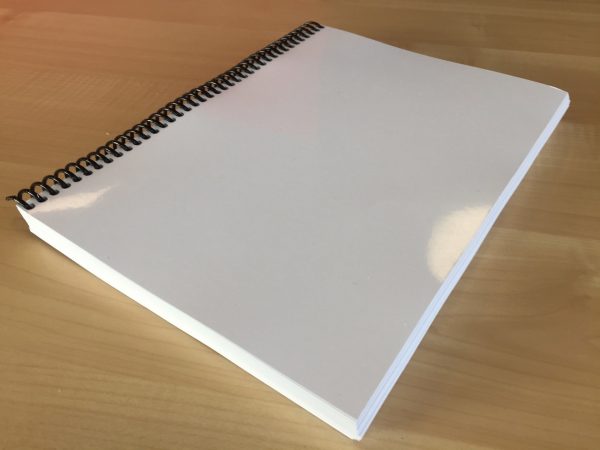 The final piece of the boxing puzzle was the computer itself. A representative sample was needed for sizing purposes. Whilst dimensions are well known, all of the box manufacturers preferred to work with physical samples. I guess people are still quite touchy feely in that respect!
Having spoken to Rick Dickinson, he was unable to release one of his fine SLA models (SLA models will be covered on a later page), as he still needed their services and was worried about breakages. In order to get the ball rolling with the box designers, it was a quick borrowing of a 3D printer, and taking the original STP file (STandard for the Exchange of Product, a format used for CAD) and rendering it down into a more basic and primitive shape. At this point all that was required was a block of the correct dimensions to simulate the computer itself. The cost saving is huge.
When the borrowed 3D printer died, Henrique kindly printed a second identical unit to send to another box design company. 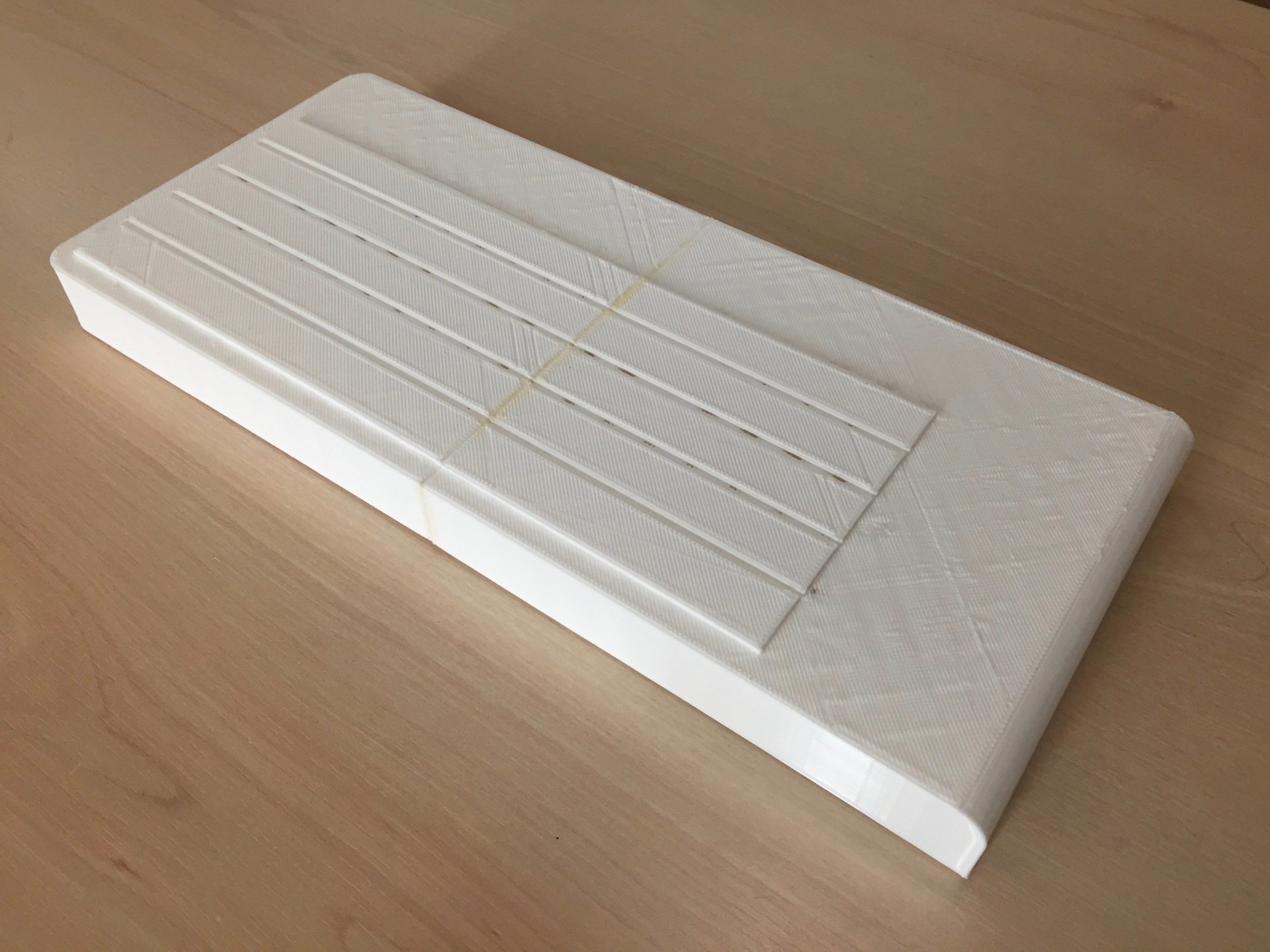 Now that all of the required ingredients are there, the work on designing the box can begin. At this point there were two companies in the mix. Company A responded with their first attempt and it was unfortunately rather underwhelming. Note that in the case of both companies, we were working to exactly the same budget and PPU (Price Per Unit). 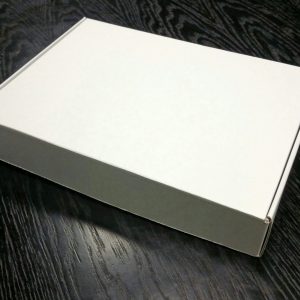 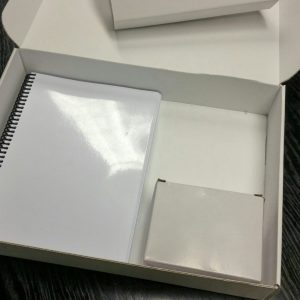 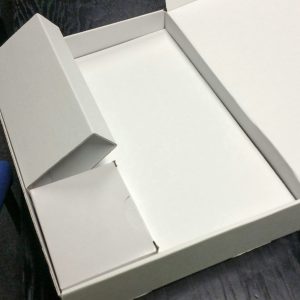 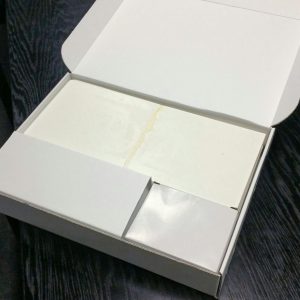 Nothing special, just components sandwiched together

Thoughts were fed back as the presentation lacked any special ingredients. It looked cheap but in terms of price, it certainly wasn’t cheap. It was worrying at this point that given the budget, was this all we could hope to achieve?

Changes were made and new photos were sent through. There was a bit of improvement due to the thick surround which made it seem less like a plain cardboard box but the internal fitment was still very basic. 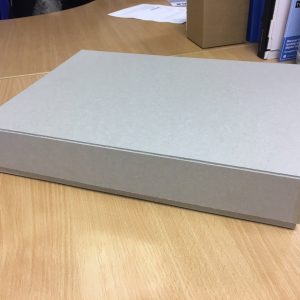 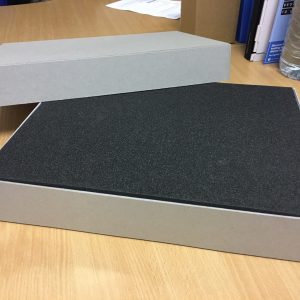 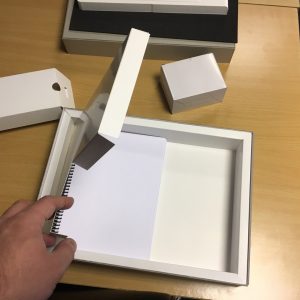 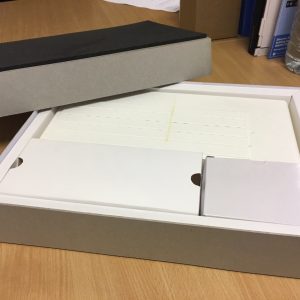 It was at this point that Company B responded with their design. It had a quality look to it and for a first attempt, it triggered that warm feeling! It was also at the same price point as the other design. 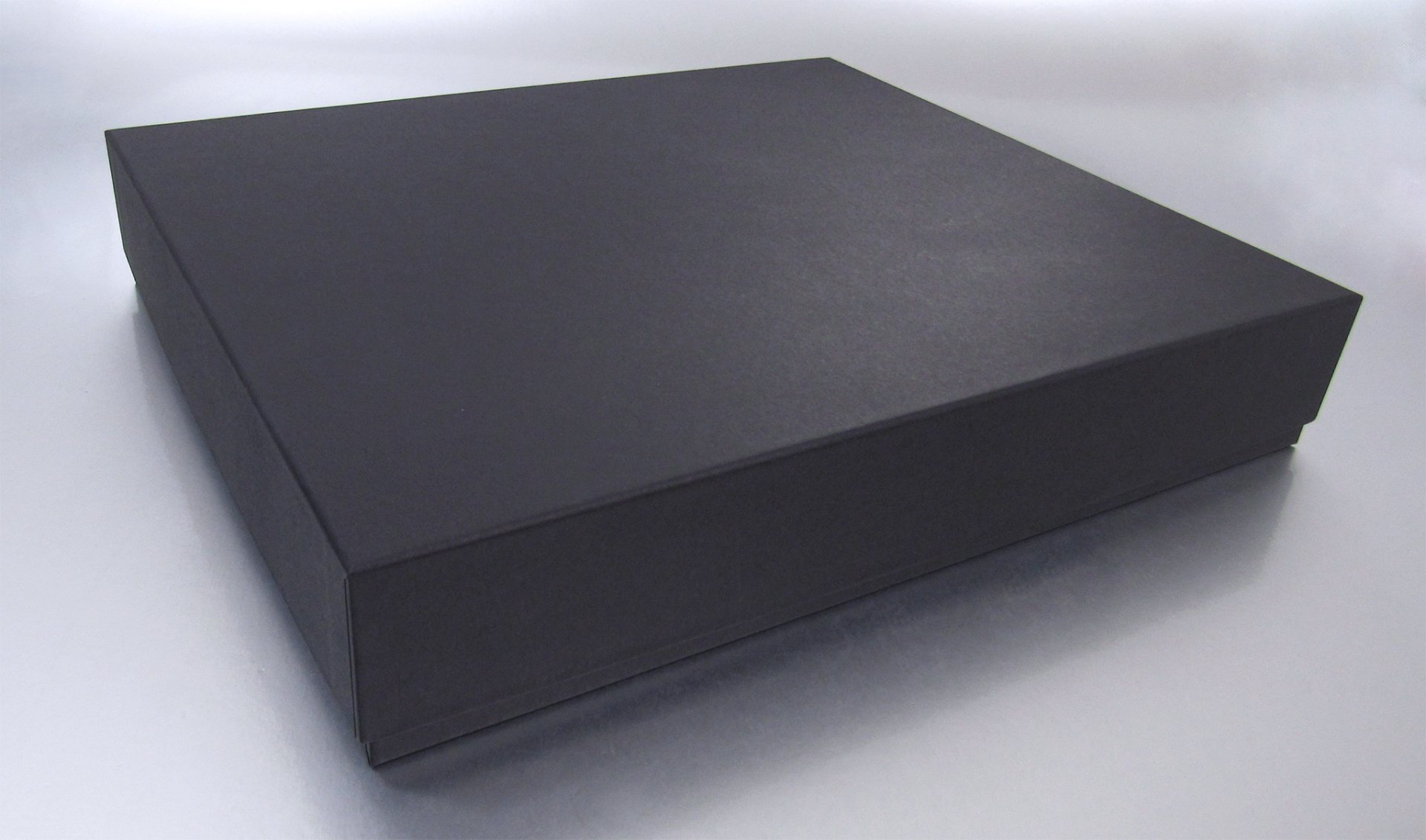 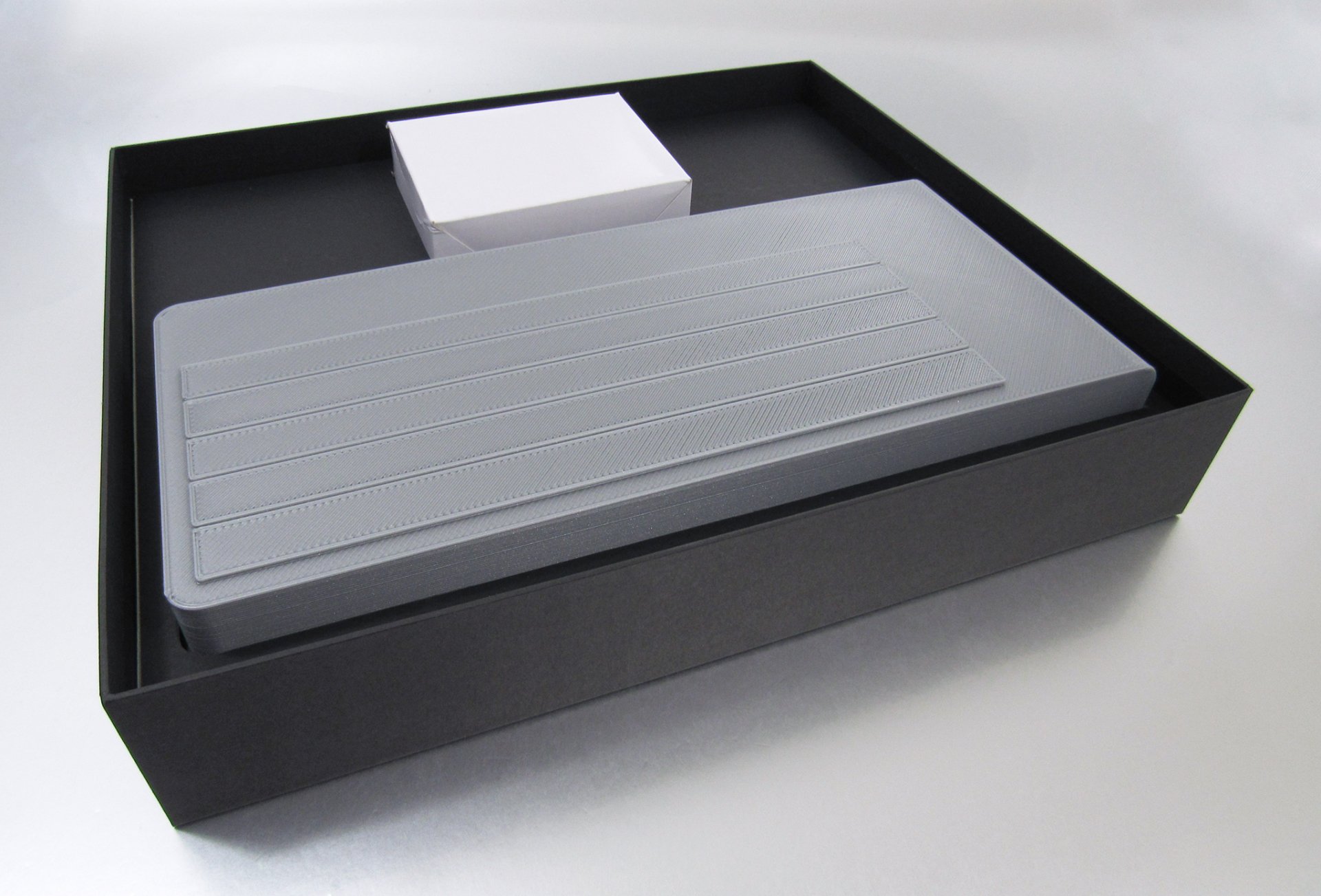 It has sleekness to it, and rounded corners (although those would have to go later) 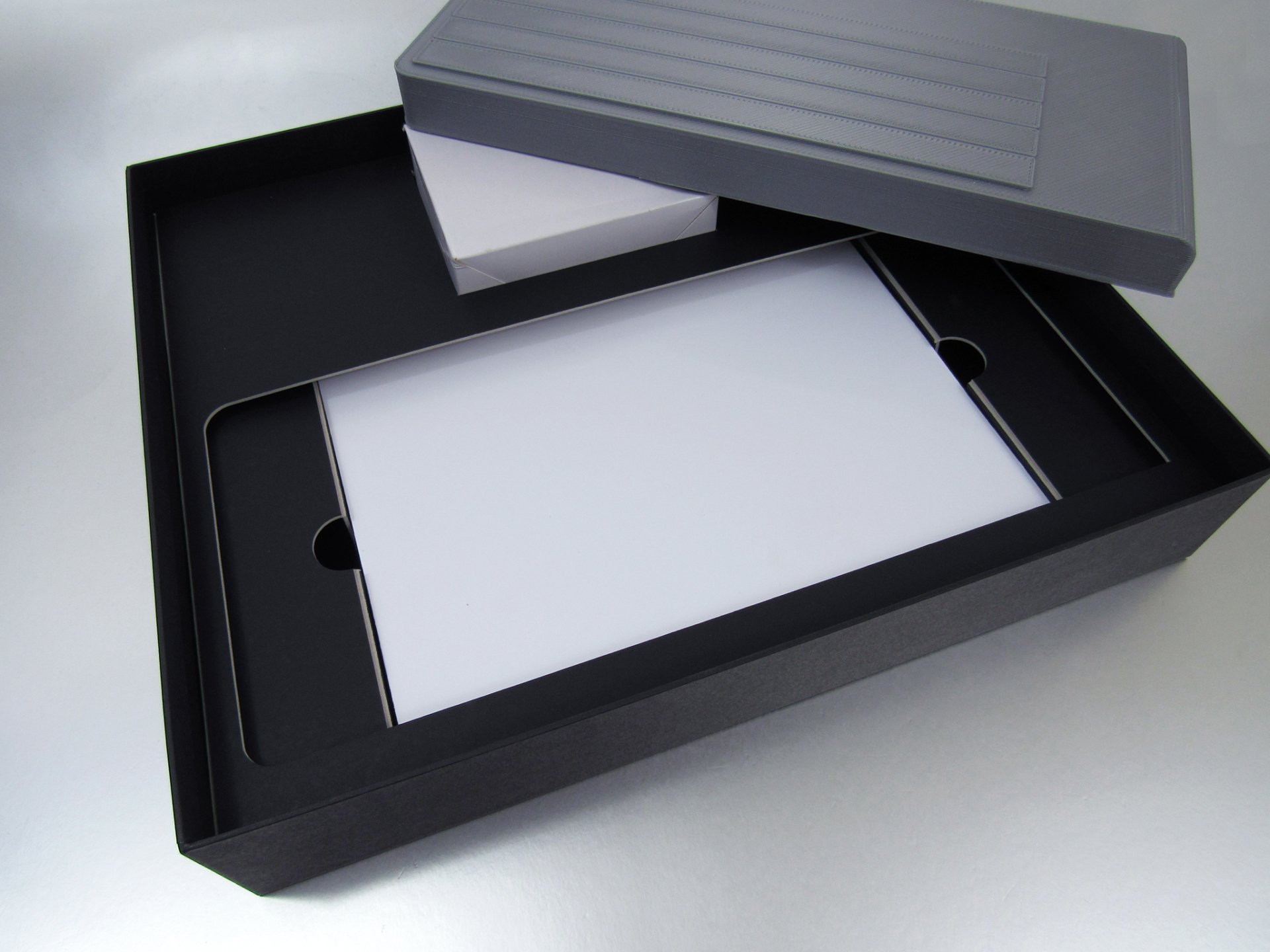 It holds things in place nicely

This design effectively won our business and we then focused solely on Company B. Whilst they had the assets to create appropriately sized fitments, the housing for the ZX Spectrum Next itself would not work with the primitive shape they had been working to. There was the small matter of a protruding VGA port at the back, and also the left side of the case which has an overhang at the top and a recess where the buttons and SD card slot are located. We need to be 100% certain of a perfect fit.
For this, Rick Dickinson was again engaged, and still unable to release one of his own SLA models, he commissioned a new SLA model which was based on just the exterior form. This would include all detail present on the case.
The box design went through a few different permutations, fitments in foam, fitments in card. 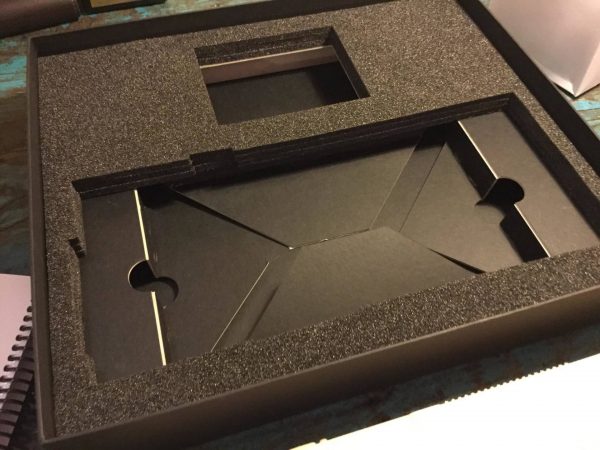 Foam inserts looked a bit too rough and “cheap” 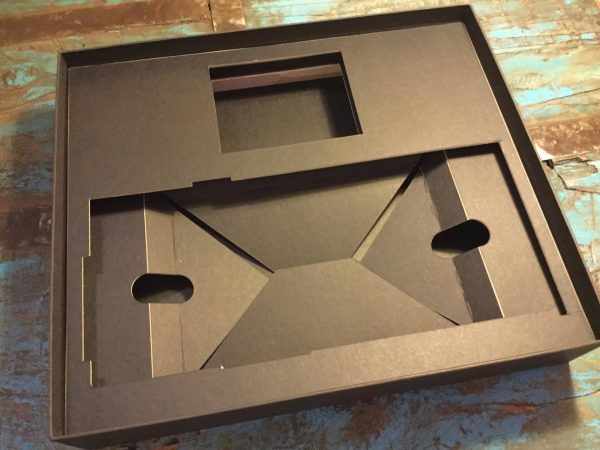 The card inserts just had a nicer, cleaner look to them 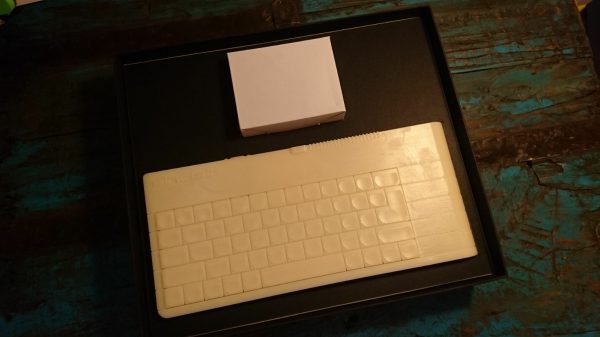 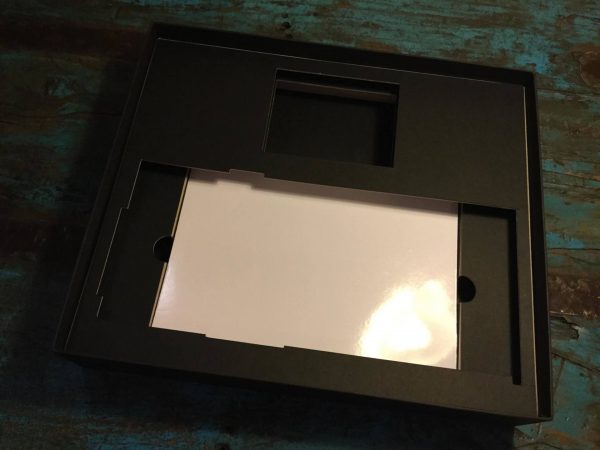 Once we had a plan, it was just a question of approving the design. 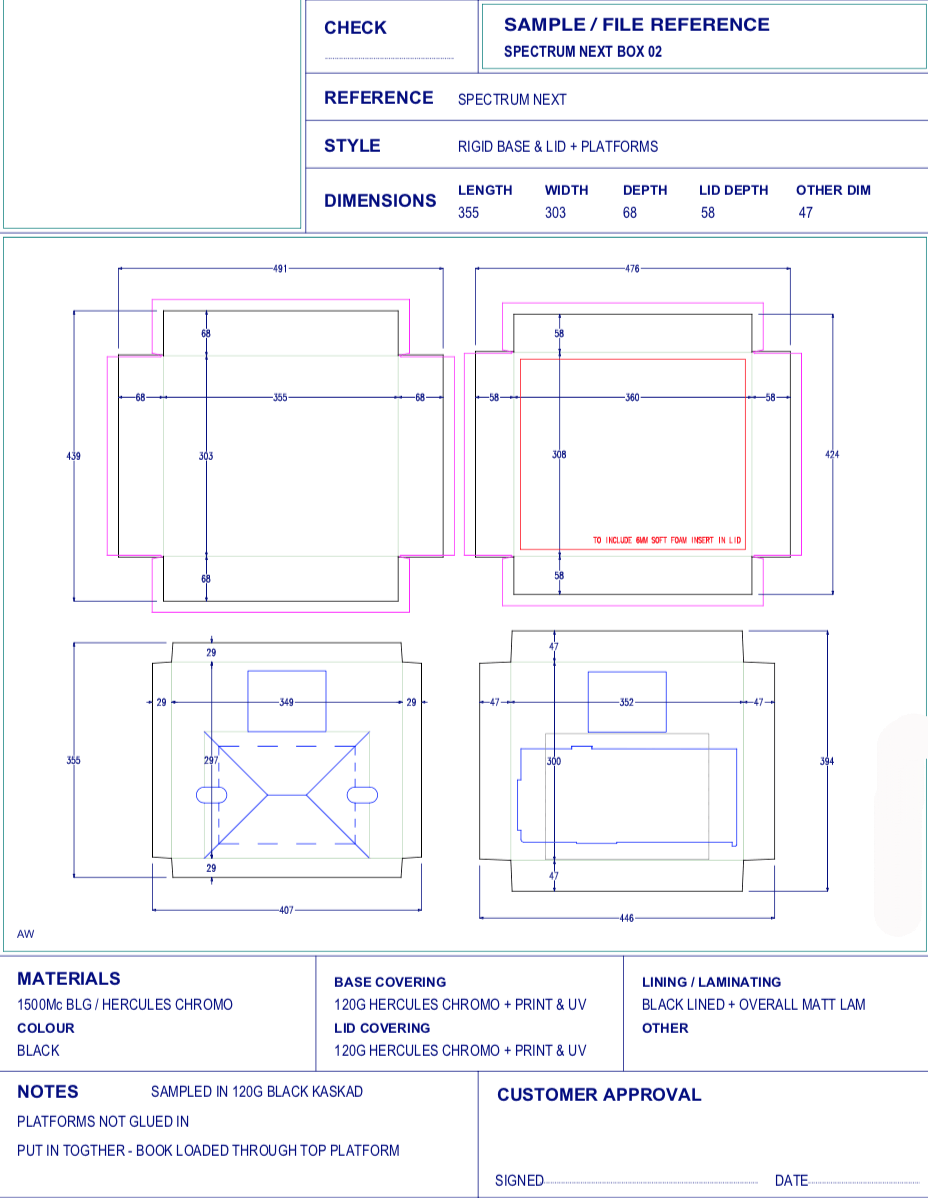 Actually, before it was signed off, Rick Dickinson wanted to have a quick word with the box manufacturer just to make sure his creation was in good hands!

And that concludes the physical design aspects of the box! Well mostly 🙂